At the helm of The GlenAllachie Distillers Company is renowned Master Blender, Billy Walker. Since acquiring the distillery in 2017, Billy has transformed the spirit slumbering in our 16 on-site warehouses into something truly spectacular.

With a half century’s experience under his belt, our Master Distiller Billy Walker is an icon in the Scotch Whisky industry. Throughout his famed career, Billy has amassed countless awards including Master Distiller/ Blender of the Year (World Whisky Awards, 2020) and in 2021, was inducted into Whisky Magazine’s prestigious Hall of Fame – a permanent tribute to those who have made a lasting contribution to the industry.

Discover more about his journey and philosophy below…

From BSc to Hall of Fame Inductee…

Growing up in the whisky-producing town of Dumbarton, Billy developed a keen interest in the craft of whisky-making at a young age. This passion, coupled with his BSc Honours Degree in Chemistry from The University of Glasgow in 1967, provided the perfect foundations to enable him to build an intimate knowledge of the science behind whisky making and flavour development.

“The chemistry gives you a very complete understanding of what the building blocks are. The art gives you that touch and feel to capture the sweet point.”

Billy’s whisky journey began in 1972 at Hiram Walker & Sons – the company behind Ballantine’s at the time – where his role covered almost all aspects of production. After four years, he moved on to Inver House Distillers, taking up the position of Master Blender in 1976.

Fast-forward to 1982, Billy joined Burn Stewart Distillers where he went on to spend two decades, most notably playing a key part in the resurrection of Deanston and Tobermory Distilleries. When the company was sold, an entrepreneurial Billy was left to decipher his next move.

The next twelve years saw him acquire BenRiach, GlenDronach and Glenglassaugh Distilleries, each of which were either mothballed, closed or under exposed to the market. It was at this point in his career where Billy truly made a name for himself within the industry, leading the brands’ rejuvenation and subsequent phenomenal success.

Billy’s next move was to his current position as owner and Master Distiller at The GlenAllachie Distillers Company, encompassing The GlenAllachie single malt, White Heather blended Scotch and MacNair’s Boutique House of Spirits. 2021 saw Billy delve into a new spirits category for the first time, releasing a new experimental rum line under the MacNair’s label; Exploration Rum.

It’s from this incredible record of success that Billy has earnt widespread acclaim and recognition for being one of the most prominent whisky figures of his generation.

Billy’s vigilant hands-on approach is reflected throughout all stages of production. He continually evaluates the aging spirit and re-racks into new wood to deliver additional layers of complexity. With an annual wood budget of over £2million, Billy hand-picks the finest casks to elevate and perfectly complement the fruity, yet complex GlenAllachie spirit, creating exceptional quality whiskies to be enjoyed across the globe. Quality over quantity is at the heart of everything that we do.

You can be assured that your whisky is in good hands. 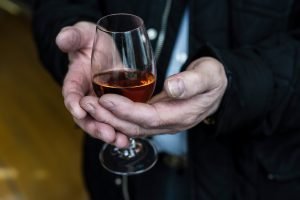